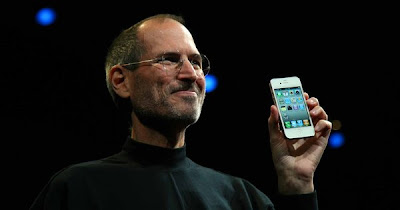 Most every educated person in the world by now knows that Steve Jobs, Founder of Apple Computers, Pixar, and various other companies passed away this week at the all too early age of 56. Most of us are in awe of what Steve Jobs accomplished in his relatively short time on earth. Most of us have no clue what his life was really like or what it took to get where he did in this life.

In an exchange with some friends today regarding Mr. Jobs over an article that was basically saying we all have the potential of success such as Steve Jobs had, I wrote the following:

”I think too much emphasis is put on simple “belief” and “positive thinking” type of messaging. The words that I think caused Steve Jobs successes are VISION and ACTION ( or “WORK”). Many people have great visions of grandeur but no work ethic. Many others are hard, dutiful workers, but are working someone else’s vision or plan. Many people want to think that just by believing hard enough or having a plan or vision is enough. Most people don’t reach their goals or vision…because they don’t work hard enough. In some cases their vision is unrealistic to their capabilities. In most cases they have no vision at all.

Much emphasis is and will be made of Mr. Jobs “vision”, but most will not focus on the hard work and SACRIFICES he made to accomplish his vision. Nothing is easy and nothing is for free in this life. Yes, life is harder for some more than others either because of lack of inheritances, baggage (emotional or otherwise), and just plain “all men are NOT created equal”. But, with hard work and vision we all can reach our own levels of potential…and that is what I strive for personally.”

Another thought I had yesterday when reading Steve Jobs obituary in the NY Times was…”what about these other people who died this week”? Here are SOME of the people who were on the “same page” as Steve…

Bert Jansch, an Influential Folk Guitarist, Is Dead at 67

Ralph M. Steinman, a Nobel Recipient for Research on Immunology, Dies at 68

My thinking was…which of these people of note that died this week was the “greatest” human being? How would you measure such a thing? By how much money they made (to me that seems to be the number one qualification in modern society)? How many lives they “saved” by what they devoted themselves to? By how many obstacles they had to overcome to reach their final epitaph?

Life to me has simply become a challenge of OVERCOMING. We spend our lives overcoming people and obstacles that get in the way of our vision(s). Sometimes it is simply overcoming bad thinking or that "tape recorder" in our heads from our childhood telling us we aren`t good enough or won`t amount to anything. From what I know of Steve Jobs, he overcame MANY obstacles to get to the level he did…yet I have a feeling he would have given every last cent he had to overcome the last obstacle to his future.

The other people on the obit list this week are known but less famous than Steve. This may seem morbid to some, but I read the obituaries once or twice per week. I read them from the standpoint of seeking inspiration. I find the obits to be the best summaries, at least in the eyes of society, of what a person accomplished and what their journey was about. I take encouragement from the inspirational things I read about them, but usually I am also reminded that in every life comes tragedy and trials. People get rich and go broke every day. Some people marry, some get divorced…every day. Some are born and some die…every day. The motivation I take from these obits is that the clock ticks the same for everyone, and no one knows how much time they have to accomplish their vision. So, let’s get on with it…LIVING...and writing our own future obituaries.
Posted by The Global Observer at 11:58 AM No comments:

There are probably hundreds of illustrations we could make about ways in which USA federal regulations are killing productivity and production in North America. Yet I think this article read today double underscores some of the lunacy going on within the last 40+ years of our government.

This article features Harold Hamm, his company being one of the most productive oil and gas producers in the USA currently, and it hits so many issues right on the head. His overall view is that America could be energy self-sufficient within 10 years if the same money that is spent on unknown technologies and less regulations were put into drilling the vast oil and gas reserves in Americas mainland. He also claims that the jobs and revenue that would be produced from freeing up the industry to meet its potential would pay off the trillions of national debt in short order. BUT, it seems that the powers that be in Washington are totally focused on new “green energy” sources and undeniably sustaining our “wonderful” relationship with the Saudis and others who gain so many billions from our oil consumption habits.

Now, before you get confused if you have read my other blogs about being pro renewable energy sources…I have not changed my mind about that. The reality is that we are 15-20 years minimum from many people`s estimation who are more informed than me from developing the technology needed to replace fossil fuels. In the meantime we continue to fork over billions of dollars to Arab countries and and the likes of Venezuela, who has all but declared war against American interests, to sustain our unquenchable thirst for oil and gas to keep our engines running…and I´m not just talking about cars and airplanes. Mr. Hamm`s opinion that I tend to believe is that we COULD be oil self-sufficient in just a few years if the federal regulators allowed them to explore and extract the vast resources we already have.

I`m sure many of us including myself are concerned about balance in all these things. I am pro environment though I probably don’t go to the extent of “hugging trees” to make a political statement. I think our government SHOULD have a role in protecting nature and the environment, yet it is unrealistic that we should think that every bird or tree in the country could be protected from development, including developing our own energy. Here are just a few brief clips of Mr. Hamm’s observations of federal mismanagement of the issue:

Mr. Hamm was invited to the White House for a "giving summit" with wealthy Americans who have pledged to donate at least half their wealth to charity. (He's given tens of millions of dollars already to schools like Oklahoma State and for diabetes research.) "Bill Gates, Warren Buffett, they were all there," he recalls.
When it was Mr. Hamm's turn to talk briefly with President Obama, "I told him of the revolution in the oil and gas industry and how we have the capacity to produce enough oil to enable America to replace OPEC. I wanted to make sure he knew about this." The president's reaction? "He turned to me and said, 'Oil and gas will be important for the next few years. But we need to go on to green and alternative energy. [Energy] Secretary [Steven] Chu has assured me that within five years, we can have a battery developed that will make a car with the equivalent of 130 miles per gallon.'" Mr. Hamm holds his head in his hands and says, "Even if you believed that, why would you want to stop oil and gas development? It was pretty disappointing."

Washington keeps "sticking a regulatory boot at our necks and then turns around and asks: 'Why aren't you creating more jobs,'" he says. He roils at the Interior Department delays of months and sometimes years to get permits for drilling. "These delays kill projects," he says.

A few months ago the Obama Justice Department brought charges against Continental and six other oil companies in North Dakota for causing the death of 28 migratory birds, in violation of the Migratory Bird Act. Continental's crime was killing one bird "the size of a sparrow" in its oil pits. The charges carry criminal penalties of up to six months in jail. "It's not even a rare bird. There're jillions of them," he explains. He says that "people in North Dakota are really outraged by these legal actions," which he views as "completely discriminatory" because the feds have rarely if ever prosecuted the Obama administration's beloved wind industry, which kills hundreds of thousands of birds each year.

It's hard to disagree with Mr. Hamm's assessment that Barack Obama has the energy story in America wrong. The government floods green energy—a niche market that supplies 2.5% of our energy needs—with billions of dollars of subsidies a year. "Wind isn't commercially feasible with natural gas prices below $6 per thousand cubic feet, notes Mr. Hamm. Right now its price is below $4. This may explain the administration's hostility to the fossil-fuel renaissance.

Mr. Hamm calculates that if Washington would allow more drilling permits for oil and natural gas on federal lands and federal waters, "I truly believe the federal government could over time raise $18 trillion in royalties." That's more than the U.S. national debt, I say. He smiles.

Another example of our government`s mismanagement of their regulatory spending and role in energy was the widely publicized failure of a California company, Solyndra, which after receiving $535 million in federal loan guarantees built a $733 million dollar plant which has now been closed and shuttered after just opening in January. Its construction featured “robots that whistled Disney tunes, spa-like showers with liquid-crystal displays of the water temperature, and glass-walled conference rooms. "The new building is like the Taj Mahal," John Pierce, a San Jose resident who worked as a facilities manager at Solyndra, said. All of this was constructed during a time when… “about 11.4 percent, or 950,801 square feet, of industrial space was vacant” in the Fremont, CA area. Another nice use of the taxpayers money wouldn`t you say?

The bottom line for me in all this is that America has many available solutions to jobs, clean energy, domestically produced gas and oil and even significantly higher tax revenues…IF we can keep the federal government from over regulating, micro managing and gouging the domestic energy producers in deference to foreign interests. The government should NOT be backing loans with your and my money to benefit one private business entity over another. This power was never granted in the US Constitution. It also seems very clear to me that the government is significantly in the way of economic recovery. Let’s remember that most jobs created by government are paid for by the taxpayer. Jobs created by enterprise and private business generates huge revenues for the government…and SUPPORTS the taxpayer.
Posted by The Global Observer at 1:40 PM 1 comment: