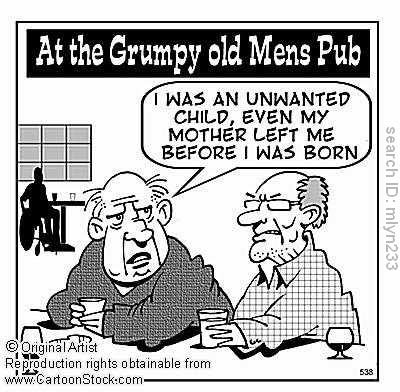 I have observed in myself and others that as we age...we get inherently more "angry". Some of us don`t express it demonstrably. Some of us cover it up big time. But...it is still there. That long building anger over a lifetime of observed injustices, disappointments, failures, people who did us wrong, and the failure of institutions such as governments and churches to follow through on their promises and claims.

I saw the movie "Grumpy Old Men" a while back, and while I could use a refresh...I remember thinking that these guys represented at least one generation of aging American men who morphed into slouching, negative, down-right mean individuals who had lost respect for most everyone and everything...even themselves. While I like to think I can avoid that aging tendency...I have already caught myself moving that direction.

The past couple years I have found myself more emotionally reactive and negative towards the institutions of the world. Government and religion has become totally suspect in my book of purporting anything truthful or helpful. Yep, I`m angry at all the deceptions I have discovered.

I also find myself much less patient with PEOPLE. I more easily grow despondent at the ignorance all around me...and even my own discoveries of how wrong I have been on so many issues for so many decades. This makes me...ANGRY! I can never replace those years of wrong thinking and acting on that thinking. I cannot reverse decisions made on trust and confidence wrongly placed. I cannot quickly or easily reverse the effects of aging, hard living and the toll modern life takes out on a person. If I could go live in a monastery (well, maybe a secular one) or health farm somewhere where I only had to focus on taking care of myself physically, spiritually, mentally and emotionally...I might be able to become LESS angry. Yet, realistically, I think and feel what I do...and I cannot deny it.

I most recently have discovered my release of anger via driving in Panama...and playing tennis. If I don´t control myself...I find myself driving very aggressively to get around or ahead of "stupid people" who don`t know how to drive, which lane to go slow in, or who willingly jump ahead of a long line waiting to merge. Its a good thing I don't own a gun anymore.

I also started playing tennis again a couple years ago...but I find my ability much inhibited from what it was when I played 30 years ago. How can that be? My serve used to be the best part of my game...now it is my worst. I find my body does not react as quickly to my mind when it comes to moving or making strategic plays. So...I get angry...and I throw my racket much more than I ever used to. I swear more than I used to. Its like, if I don't find an outlet for my frustration and anger...I think I might explode right there in the middle of the court.

Now, its easy for others to say "just calm down, take a deep breath, and think in a more positive manner. It is a beautiful day...we are getting exercise...and enjoying each others company." BS...we are here to compete and to win...otherwise why play? Of course, the main problem is "I am beating myself" by being so angry and out of control. While I believe in "mind over matter"...that doesn`t come automatically. A couple weeks ago I even told my playing partners I would pay them each $1 every time I threw my racket. Amazingly, I didn`t throw it once that day...and won both sets I played. I guess its all financial...:)

Now, I do believe there is such a thing as righteous or justified anger. Injustice should always make us angry. When we become complacent to injustice, we will soon find ourselves accepting it...and being enslaved by that which we have accepted as "normal" or "acceptable" injustice.

I also do not apologize for being angry about being lied to and cheated...whether that is in a game, or whether that is institutionalized stealing such as the USA social security system and misappropriation of government funds my taxes were partly paying for. I definitely see anger rising in many of us Americans along these lines...and some of it is overdue. The main issue is...what are we doing or going to do about that which angers us? Anger can be good if it initiates positive mobility towards correcting injustice or outright fraud. And if that anger turns into a new "revolution"...then so be it. Revolution is probably what is needed in many cases...and resoluteness brought on by anger can be a revolutionary catalyst in life.

In summary, I do believe it is best to find balance between controlling anger and letting it out at certain times and in certain ways. I think people who hold all their anger inside eventually experience significant mental and/or physical "illness". Yet, I also have observed that people who express their anger all the time are no fun to be around...and they can miss out on the more positive side of human love and interaction because they can`t get beyond their anger and be more positive.

At the end of the day..."don`t let the sun go down on your wrath"...meaning don`t take anger to bed with you. Deal with it, get it out, express it, do something about it. Then you can probably rest easier and live longer knowing that you are human...and you have demonstrated that "you don`t have to take it anymore"...
Posted by The Global Observer at 12:14 AM No comments:

This is a very political year in the USA and elsewhere in the Western Hemisphere. With technology and mass media lined up to carry or comment on every candidates words...and then in the next nano second line it up to something else they said 20 or more years ago...is wreaking havoc on campaigns and "bringing chickens home to roost". What is often hard to determine is what a candidate REALLY believes versus what they CLAIM in order to be politically expedient.

Of course, the other thing we sheeple tend not to leave much room for is the evolution and change that comes if a human allows himself to grow and change. I think of many things I said and thought 20-30 years ago that I now would shudder to utter. How simple life and opinions seem to be when we are young compared to the complications we learn as we grow older. While the world craves black and white answers and truths...we find more and more that the answers or truths come in mostly various shades of gray. Most of us don`t like gray...but gray is the predominant color along these lines.

Our other tendency regarding "truths" is to defend our perception of them even in the face of significant doubts or new information to the contrary. Our truths become part of who we are...and to change or admit error in who we are is tremendously painful and sometimes impossible to bear. Many suicidal tendencies tend to creep up in people who find out that some of their heroes or institutions are not all they were perceived to be. The idea of...say computers... shutting down and then rebooting for fresh input and perspective is not so easy in the human mind. The only way to completely reboot the mind is to develop a form of amnesia for all previous programming. This is next to impossible as most of us live for SELF preservation and find it painfully difficult to change our personalities and perceptions. I think the "truth" just hurts too much to change our perceptions of it sometimes.

Truth of course is the greatest "goal" of the philosopher or inquisitive mind. Defining and sustaining truth is often a full time job...that most of us don`t have time for. So...we "go with the flow" of our cultures and families. Whatever institutions we define ourselves by tend to paint our truths "by the numbers" for us. Unfortunately, for truth itself, it tends to get very shortchanged in reason and perspective. If we only look for truths that fit OUR often unproven preconceptions...it should be very difficult to sense much security in our positions and perceptions.

The painfulness of false truths is that it calls into question one`s integrity and sincerity on issues of faith and/or patriotism. One of the most painful things to say or think about our own country or religious institutions is when we uncover the many falsehoods and cover-ups that have been devised by governments and religious rulers for hundreds or thousands of years. Perpetuating myths for thousands of years never turns myth into fact. Yet...a majority of the world`s population place their meaning and identity in the hands of mysticism and blind faith causes. To have blind faith as a cause for self improvement or to "feel" better about the worlds mysteries is quite understandable if fallible. To have blind faith that causes one to hook up bombs to their persons and blow up "Infidels" is quite another and is a grotesque result of blind faith.

In this political year in the USA, we have various perspectives being brandied about by most all the candidates about their "faith". We have a recent ex President who based his decisions on going to war and sacrificing tens of thousands of lives...after reading the Bible and praying. Now, not all of us come to that same conclusion by reading the Bible and praying. In general, I now find it very troubling when people start quoting religious texts to support political or personal actions. Now we have a myriad of these people, quoting the same book and referencing the same religion, and coming to very different conclusions about what is just or fair. Their perceptions of "truth" have become a danger to all of mankind from my observation.

Absolute truth can be difficult to arrive at, and demand tremendous changes that we SHOULD adhere to when we find it. Yet, the most dangerous and "hurtful" truth is that which is 10% or 20% false. That falsehood could kill you...along with a few million others...both literally and figuratively.
Posted by The Global Observer at 11:41 AM No comments: