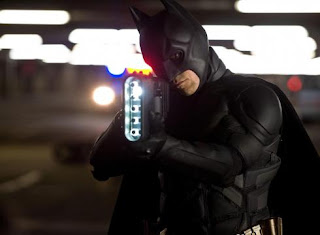 With this hideous mass killing in Colorado of innocent attendees at a movie theatre...once again the press is making a field day of this tragedy. Somehow, when these mass shootings in the USA happen, many in the press start heaping the blame on guns. I would like to simply start by pointing out, guns are programmed or shot by...willful human beings. Guns are not the culprit...people are.

How is it in our human condition that in this day and age we have come to the point where we cannot confront our own insane behavior or mental conditions...and continue to take out our wrath on inanimate objects? If you carry this logic very far, you start questioning the legality of knives or even basic tools that are used in construction and everyday living. Hell, you might as well start outlawing all the bad foods that people eat that kill more people every year than guns. Since it seems so impossible for the average human to learn and use these things the right way, this mentality says we really should have bigger government to control our access to guns, knives, basic saws, screwdrivers and hammers we use in everyday life. After all...people die everyday from irresponsible use of all these objects.

If you question that, just think of all the loose nuts and bolts of faulty auto parts that have caused thousands of deaths in collapsed construction or auto accidents. I think we should outlaw the use of those tools that have been so irresponsibly used in construction. Also...robots. Robots...programmed by people...have caused systematic failure in certain assembly line goods that have led to hundreds of accidents and deaths. Gas systems have been faultily constructed so that they caused leaks that kill hundreds of people worldwide in recent years. We should outlaw those terrible robots...and the tools that made them...for the great anguish and pain they have caused the human race. I know you are thinking I am sounding ridiculous now...but how different is this than the mentality of the article referred to above?

From a legal argument...lets focus on this from another angle. One of the most common bumper stickers I have seen on this subject over decades has been ¨if we outlaw guns...only outlaws will have them¨. I personally find significant reason to this sentiment. Laws are passed usually to protect the law abiding. People who don´t care about law usually don`t care what the law says or means. Do we REALLY think outlawing guns will keep bad people from getting them? Come on...get real. ¨ Illegal¨ drugs have been illegal for decades...yet any of us can find these drugs on any major American city street-corner in 5 minutes...if we know the right neighborhood to look in. How is that working for us...apart from making the prison industry one of the fastest growing industries in the USA?

I know some other people in the USA who think that only police and military people...tied to the government...should be allowed to have guns. Hmmm...I guess the historic wars including the USA´s own civil war of the 1800s and War of Independence were meaningless in guaranteeing freedoms and independence of all Americans to have equal rights...including the right to self defense and to bear arms in defense of liberty and justice? Or...are we suddenly so irresponsible and careless that having a gun means we are going to kill someone or have to use it against another person? I would argue that a vast majority of guns are NEVER used...and when they are it is on paper targets or occasional game hunting excursions.

Finally, as crass as some of my Liberal friends will find this statement...I truly think guns in a society as crazy as the USA is a solid deterrent for what happened this week in Aurora Colorado. If I was caught in such a hellaceous cross fire...do you think I would hesitate to use a firearm in defense of myself or others in that theater? Not on your life. The perpetrator would deserve no mercy...nor get any.

And excuse me for saying...but I find it very hypocritical of any American to question the legal rights of owning and using firearms in self defense within our country, while supporting our troops use of guns in Iraq, Afghanistan, Pakistan or as we did historically here in Panama against foreign ¨enemies of State¨. We took the lives of thousands of innocent bystanders and citizens of these other countries. How are guns somehow more ¨moral¨ in those instances?

The morality of ¨firearms¨ to me is a very neutral topic. Like so many ¨things¨ in life...it is how these things are USED that determines their morality. Therefore, it is the intent and mentality behind them that is moral or immoral...not the object itself.

Am I saying I love guns or the idea of having to carry one? Absolutely not. My feeling about guns are about the same as a car or shovel in the garage. I can kill someone with either one of those possessions. That doesn`t mean shovels or cars are moral or immoral. Lets get our thinking caps on straight.

And finally, I DO think it is important to teach people how to use guns responsibly. I thankfully grew up in an age where hunting and guns were normal everyday realities. My Dad taught me how to fire one at about 10 or 11 years old...and my favorite memories with him were hunting trips in Northern Michigan's woods where I learned many arts of ¨survival¨. A friend and I used to take our rifles or shotguns to school in our cars back in the early 70s to go hunting right after school...sometimes with our Biology teacher. I imagine those days are forever gone. It is sad when guns are now so demonized when the demons are basically a few bad humans in our midst.

So, do I want to return to the days of the wild wild west not so long ago where everyone carried guns for self protection since there were no police around in those places? No...I am happy to let public servants like my nephew and a niece who are police officers carry the load on that front. Yet...I also believe all free citizens in a society should have the right to bear arms...as guaranteed in the USA constitution...even if from time to time they are used for hideous crimes or for taking out aggression. When those people come along...I for sure want my own firepower. And morally, I will not hesitate to shoot...as sad as that reality may be. To me that is more moral than being a helpless, unprepared victim.
Posted by The Global Observer at 7:15 PM 4 comments: 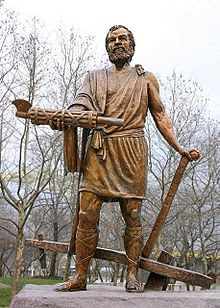 I was reminded in an online conversation today of the historic Roman leader "Cincinnatus" who ruled Rome for two brief periods over 400 years BC. In this election year, while it is probably too late to hope for such an entity to enter the political arena anywhere in the world, I think it worthwhile to spend mind energy in search for such a leader. In an age where elections go to the most elite, or the leader who offers the most freebies to the electorate...we might want to consider where we can find this alternative type of leadership.

Cincinnatus...who has two USA cities named after him...was a "model of Roman virtue and simplicity". He was called upon by his fellow countrymen to lead them two times during invasions and circumstances of emergency. He answered the call as a lightening rod of leadership...and as soon as he restored law and order, he immediately gave up his power and returned to his simple and personal life. Why can't we find current politicians who have more of this service mentality?

I actually believe there are more "Cincinnatus'" living among us. The only problem is, our institutions and traditions do not allow these types of people to run for office. In the USA and other Western democracies...the only people that can run for office are those who have enough money...or are bought and paid for by those who do. People today have rabid religious zeal for their various political parties...and are blind to independents or even opposite party members who offer the best attributes and ideas to lead our country out of harms way. Everything is about movements, labels and affiliations...not about individual values, ideals and fortitude to stand up for what the individual deems to be right.

What is it that drives our "career" politicians in various countries to continue pursuing office? How many of them truly have a "servants" attitude towards their office versus standing for special interests and power itself? How many would willingly stand down if the majority of the citizens simply wanted them to? Not many I don't think.

Most current day conflicts such as Syria are caused by these tyrannous despot leaders who can think of no other life for themselves besides wielding dictatorial power and having their "time in the sun" of unbridled power and corruption. While we could applaud that changes are happening during this "Arab Spring" of revolt and revolution...we also must raise the question "who will replace the previous despot leaders?". Often times we see a country go from bad to WORSE when choosing or supporting their leadership. It definitely seems more and more difficult to find clean, democratic, non politically driven leaders in today's world...wherever you look.

I believe the USA...and other countries in the world...are in need for a Cincinnatus type leader. We need leaders who will serve without personal gain. We need leaders who have proven their efficiency and success in real life situations...not just in the systems and institutions we have made for governance. We need business leaders to lead our economy. We need moral leaders at the highest offices of our military who are not quick with the sword, or war-type spending. We need agricultural leaders to lead our country in food production and free market applications. We need intellectuals of the highest caliber in our court systems who are practical and fair. Politics as usual needs to go away.

We need leaders who represent service to the greater good, civic virtue, lack of personal ambition and modesty. Instead, the USA is lead by only 535 Congresspeople, 9 Supreme Court justices, a President and a Vice President. The only people not elected are the Supreme Court judges who are APPOINTED by the President for LIFE LONG service. It is scary that so few lead so many...and are also defacto leaders of the "free world" which is a huge responsibility most of them are NOT prepared for. In fact, many of our leaders have been convicted of crimes and misdemeanors that should prohibit some of them from ever serving.

I don't know where the modern day Cincinnatuses are in the world...but I have to believe they are out there somewhere. I HAVE to believe that...the alternative is too painful to consider.
Posted by The Global Observer at 11:12 AM 1 comment: