Our problem is Spiritual

Open letter to the President of Panama 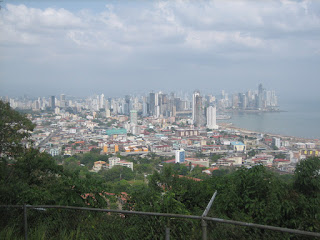 Dear Mr. President,
It has been five years since our family left Panama after spending 9 years of our lives there. We were there since 2006, watching all those buildings go up in Panama City, 2 different upgrades of Tocumen International Airport, the development of scores of hotels and resorts all over this small country which is the size of the State of Delaware.  We saw thousands of expats come and go from Canada, the USA, Europe and eslewhere. It was exciting to see the new projects of infrastructure such as the transit system, new bridges, and gradual improvement of the roads. The expansion of the Canal was another feat of engineering that the country could be proud of. The GDP was supposedly growing around 6% per year while all your neighbors were strugging to grow at all.

Unfortunately, success and growth could not be sustained for long. We watched as government and street level corruption continually grew along with the growth of the country. While we lived through three shifts of Presidential administrations, the one thing that was consistent with all was ongoing graft and corruption. This ended up sucking the gas right out of the proverbial balloon of Panama's growth. International accusations against Panama as a black listed place to "launder money" grew to a level where your government succumbed to global pressures of submitting your country's financial system to international scrutiny and governance. Panama lost its sovereignty by letting the USA determine its banking laws and Panama becoming a vassal state for any other government that wanted to spy on its citizen's business affairs in Panama.

In 2010, in a major act of subsurvience to the USA government, your government signed the FATCA tax treaty with the USA which basically meant your sovereign banks were an extention of the USA's Internal Revenue Service. Shortly thereafter, most of your domestic banks were shutting down American's business and personal accounts unless they were valued at over x amounts.  You even agreed to report the financials of sovereign Panamanian corporations and foundations if they had American investors or owners involved.

The unintended consequences of these actions were that your government made it impossible for Americans to invest or do business in Panama on an equal competitive playing field with other foreigners or your domestic businesses. Overnight, all Americans doing business in Panama were suspected criminals or tax cheats until they could prove otherwise. Based on having to legally report and pay taxes on our worldwide income from Panama while all our competitors did not meant we would have to make 25-30% more profits just to equal the profits of our competitors. This meant we would either have to become criminals per your new laws and trade agreements, or leave for greener pasteurs elsewhere.  Many of us chose to leave, albeit not because we wanted to. We had to leave friends, family, and businesses behind to start over...just because of a Panamanian Presidential stroke of a pen.

Now, going on six years later, Panama's boom has turned to bust. Outside of growing revenues for the Panama Canal, everything else is down down down, except for maybe the illicit drug markets.  Tourism is down, building/contruction is down, unemployment is up, along with crime and corruption. Your banks' reserves are significantly reduced, and now in the middle of this global COVID virus pandemic, you have shut down and locked in all your productive citizens. Just to survive, people are turning to the black markets once again for food, alcohol and money which is becoming increasingly scarce for everyone there except to oligarchies that run the country financially and pay off your politicians.

Now we are in the middle of the global economic lockdown. None of us know the full picture of why and how this has been done to us, but all we know is our lives throughout the globe are being changed forever.  The powers that be are breaking down all resistence barriers to tyranny and while most of the masses are huddled in fear of a virus, some of us know that this is about much more than a pandemic. This is basically a peaceful "coup" of all the machinations of national sovereignties around the world that will likely cause a reset of all monies and global debt structures. Global socialism is the logical result.  The rich and their countries will be FORCED to bail out the poor countries and their hordes. Panama will not have it as bad as most because you have the Canal and you have only 4 Million citizens to take care of compared to Colombia (50 Million) and other much larger Latin countries that will have a bigger challenge on their hands.

In response to all of this, many people are waiting to see what Panama will have to offer when this "crisis" has leveled off. There will be millions of displaced people who will have lost their jobs, businesses, and large portions of their assets. More people than ever before will be looking for GLOBAL options of where they can move and live more economically and under safe, consistent governmental structures.  We ourselves would consider moving back if Panama was more inviting for American and other foreign retirees and investors.  We also believe key to a turnaround in Panama will be more moneyed retirees and business interests investing in the banks and infrastructure of Panama.

To that end we recommend to you the following steps to bring back investment and foreign residents to your great country:

These changes are not impossible to do. Since you have decreed such extensive changes and limitations of your people based on this virus, surely you could use your powers to make these changes that could once again make Panama a powerhouse of global tourism, enterprise and even bigger financial center for all the world!

We would return to such a Panama.
Posted by The Global Observer at 1:05 PM No comments: