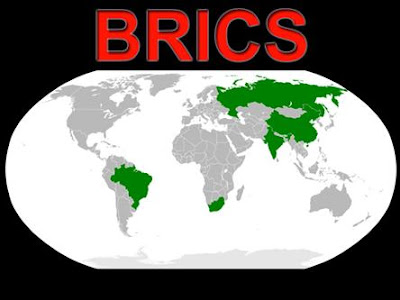 This article on new developments in the BRICS emerging markets should be read by anyone who cares about the USA or dollar based investments. In case you don`t have time to read the whole article, just focus on this quote...

A world-shaking event occurred this week in the global financial arena, and its impact will be felt for years to come. It will yank the wind straight out of the U.S. dollar’s sails and force a fundamental de-valuation of assets down to emerging-market levels.

Five leading nations — Brazil, Russia, India, China and South Africa — are starting their own financial system with a development bank funded exclusively by their nations.

They aim to establish an easy convertibility of currency (the real, ruble, rupee, renminbi and rand, respectively) and a focus on building long-term business relationships among themselves.

I have been writing and opining for the past 4 years now on the decline of the USA as an economic and military superpower. In my opinion, we are seeing a decline so quick and pervasive, few can see it for its size and speed. It is like a meteor heading straight towards the heart of our country...yet very few see it coming. Of the politicians running for President in the USA, only Ron Paul has alluded to this article and other such factual concerns.

I know many of my friends and family back home do not share the sense of alarm I have about our country`s security. More than once I have had people close to me say "well, if America goes, the whole world goes down the tube with us". For those that feel that way, I can only beg you to reconsider such simplistic thinking. Consider the historic demise of all former empires...from Rome to Great Britain. Do you really think the world would end without the USA?

If the current trends continue and the US dollar keeps tanking...you will be locked within your borders with no freedom...or money...to roam. Foreign powers and investors will buy us out at pennies on the dollar. Your debts will double almost overnight against foreign currencies. You will not be able to invest in foreign concerns...even if the SEC allowed you to...because you won`t have enough money. Gas will be $8-$9 per gallon...but a much smaller portion of the population will be able to afford it. America will be exporting more cars than it sells domestically. Have you seen the recent strikes and revolts in England and France, Italy and Greece? (probably not) Those will be nothing compared to the violence and revolt you will see in the USA by the working class. Our government is already sneaking new laws and plans into the books to authorize military actions against its own citizens. You don`t think they see this possibility coming?

Sure, the world has grown drunk on America`s consumerism...both in selling to America`s thirst for oil, gas, precious metals, new houses, new cars etc...and at the same time many of these countries are adopting some of America`s spendthrift, carefree attitudes for consuming wealth. And absolutely, if America went "down" tomorrow, there would be tremendous global repercussions economically and otherwise. Yet, at the end of the day my observations are that many emerging countries are already picking up where America has left off and are starting to create more independent markets on a larger scale than America has done in the recent past. They will simply plan, invest and sell OUTSIDE of the protective USA market(s). This will force Americans to "buy American"...because they won`t be able to afford any foreign goods.

Please consider for a minute the immensity of the BRICS nations mentioned in the previously mentioned article... "BRICS nations represent nearly half the world’s population. Two of them are already among the top five economies in terms of purchasing power parity...". A wise person should consider how quickly this combined half of the world`s population could replace Americans as the "nouveau rich" consumers. They have already replaced us as manufacturers and producers!

I tend to think a majority of the problem in the USA is the isolated, insular image of our country we Americans have produced. We continue to drink the false pride of institutionalized patriotism tied to religious fervor. We continue to be infatuated with the "rich and famous" sport-stars and Hollywood celebrities who make millions off of our fantasies...without realizing how many of THEM are going bankrupt or losing so much of their profits to increased taxation or overspending. Most of us have never been outside of the USA...and many of those that have always look at other countries through the distorted eyes of our Western Civilization. Yes, it has been a wonderful run in America...but we are currently playing a losing game, especially when we continue to back the losing policies and false "leadership" of our current representative government and their rich minority of supporters.

As I continue to say to those few who will listen..."Globalization" is here to stay. America cannot legislate or even militarize its defenses sufficiently against the competitive landscape that is coming. The next step will be our loss of military dominance...which we are quickly using up on causes in the Middle East, Afghanistan and the false "drug" and "cultural" wars we are fighting...and losing. If you realize the importance of the fact that these BRIC nations are selling each other the latest technologies, including fighter jets and NUCLEAR submarines to build their own military complexes...America can no longer keep up economically to sustain its military dominance over so many foreign powers. This will be especially so if we continue to spend on the over 1000 foreign bases that are of questionable strategic importance or constitutional relevance. It is time for America to get away from offensive positions...and pull back into a more defensive, border protecting, cost saving strategy militarily. We need to rev up our economy...not our military. If a world war flared up today, I am not convinced America could meet the demand and dominate as we did in WW2. Ours is not the same America. I believe some of our leadership in America understand this and this is a big reason why we have not gotten more involved in Syria, Libya and have been trying to keep Israel from attacking Iran. Some of us know the truth about our limited capabilities.

The world is changing rapidly...and those who don`t change with it will soon become irrelevant. I will not accept becoming irrelevant without a fight. We need some new reality therapy in American government and financial circles. We cannot continue letting the "few" destroy the fundamentals of capitalism and freedom for the sake of their own greed and lust for power. The arrogance of our American leadership is at an all time high...and yet these same people seem to have very few answers to the BIG questions facing our country. Most of them want MORE power, MORE regulations, MORE socialism while many of these emerging economies are "eating our lunch" in the international arena.

Wake up America! We need more friends internationally...not more enemies. You cannot look down upon the Latins, Asians, Indians and Russians any longer. You need to make them "brothers" instead of "others".

I end with this video by Bill Maher which while a little dated, helps underscore the reasons the USA is falling behind while emerging markets over run us...

Posted by The Global Observer at 4:54 PM No comments: