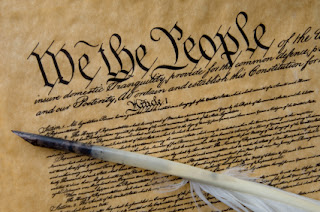 It is increasingly becoming difficult in this world to know who the "good guys" are.

Since the recent bombing at the Boston Marathon, we have various government and law enforcement people coming out with sensational views and twists on this perplexing situation.  While it is obviously sad to have experienced this dire act that killed and maimed so many at the finish of the race...I fear our government and others are hyping this situation to accelerate their own agendas which will truly mean more CONTROLS on the American public, throwing out the Constitution of the USA and turning the USA into a "military warzone".  After all, this is the easiest way for a government to LEGALLY have free reign in exercising power to control the masses. When you see militarism directed at a government's own citizenry, you are seeing the end of liberty in that land.

We have suspension of rights or due process that have happened at various points in US history, and in some cases for good reasons.  President Lincoln suspended Habeas corpus twice during the Civil War. It was suspended in Hawaii for the whole of World War 2 after the bombing of Pearl Harbor and the "corralling" of thousands of Japanese Americans in California and elsewhere. I am not sure those actions were necessary, but again, it was fear of the unknown that instigated these limitations of freedom.

The November 13, 2001 "Presidential Military Order" gave then President George W Bush powers to detain non-citizens simply based on SUSPICION of terrorist links or being "enemy combatants".  This allowed indefinite suspension of "due process" of law in detaining or prosecuting "persons of interest" as then Attorney General Ashcroft liked to call them.  While it was understandable that the USA government and its citizens wanted to control and defend our borders from terrorists after 9/11...many of us believe that our government was over reaching in its grab for power and controls apart from a Constitutional approach to investigation and apprehension of criminal elements or terrorists.  The insidiously named "Patriot Act" by the Bush administration post 9/11 contains numerous clauses and points that are in direct conflict of Constitutional authority of the Presidential office and of Congress as a whole...and while some Democrats and the current President spoke out against it over the years...they now have taken no measures in over 5 years of majority power to cut back its provisions.  This to me double underscores the hypocrisy of political leaders and the allure of power.

During the current administration in the USA, we have seen the persecution/prosecution without "due process" of the young soldier, Private Bradley Manning, who participated in the "Wikileaks" affair which spilled the beans on so many politicos world wide with "classified" information that was taken and released to the general public. This has created a firestorm of intergovernmental wrath probably never experienced before in modern times.  There is no rage like a bully...revealed for the liars and cowards they are. We are now seeing our government, tied to many of their statist allies, persecuting the soldier and Wikileaks founder with no due process of law and using trumped up, military style rules of law to punish these individuals for simply disseminating truth. Most of what was released of these "leaks" are in my opinion things that should always be open for the citizens of our country to review or know about.  The absolute power of leaders to hide or "classify" information has been taken to an extreme that is intolerable by responsible citizens who should be more informed and aware of how they are being governed. History I think will deem Private Manning and Mr. Assange as freedom fighters and global patriots even if that may not have been their principle intention. Yes, it is very embarrassing to my country...but more than deserved.

(If you want to have a small taste of what the Wikileaks affair is all about or have never checked their website for yourself...just check out this interview with founder Julian Assange...and do NOT believe all the hype of world media against him.  While he may not be a saint, he is not a fool. )

Now we have people like our "good" Congressman Lindsay Graham  wanting to rewrite the constitution in order to give the government blanket powers for detaining or prosecuting ANYBODY, citizen or non. Why is it that every time some shooting or bombing happens inside the USA, government continually calls out for MORE controls and/or limitations on everyone's freedoms?  In light of today's conflictive world, I would suggest that we have a relatively SMALL amount of such incidences under our current laws and resources for enforcement. Now that we have captured two delusional youngsters in this action, our leaders continue to call for MORE powers or limitations of freedom for citizens.  Where does this come from?  What is the logic?  As we have seen time and time again throughout history, when a government assumes absolute power over it's citizens, it's citizens have arbitrarily given up their personal and collective freedoms.  When this happens, as our wise forefather Thomas Jefferson wrote, "Those who desire to give up freedom in order to gain security will not have, nor do they deserve, either one".

My current great fear and observation is that our USA government is using these terrible events to position themselves into more autocratic powers. These are the same tactics used by all previous empires to rule and dominate the masses...from Rome to England to Hitler to Chavez in Venezuela.  They demand that the poor and uneducated give their leaders the absolute power to "provide for them and protect them" from the evils of those mysterious outsiders and terrorists who would seek to take away their freedom and safety.  While it is very human to want to be protected from calamity and loss...if it means I have to live the rest of my days in a virtual prison bound by borders and ruled by absolute powers that be...I prefer to take my chances in the street as a free man.

I am not convinced that these two young Chechen brothers who apparently committed this travesty in Boston should be a catalyst for our government pursuing suspension of rights or Habeas corpus for ALL citizens of our great country. The government and media readily admits that these two young men were working alone and probably in some fantasy world of their own making that unfortunately was acted out in this hideous manner. Yes, we are happy that they have been "taken out". Yet...we have these asinine politicos now raging for MORE blind power, LESS restraints on militarization within our borders and they are basically saying to us that ONLY THEY can protect us from this happening again and again.  They need our guns controlled...but they need freedom to use theirs without question or limit.  This is a very scary proposition for the citizenry of the USA.

I for one believe we MUST return to Constitutional controls on our runaway big government...from taxes to entitlements to warfare.  I would suggest that most people who now vote...especially the younger generations...have no clue what the Constitution of the US says.  They do not understand "limitation of powers" or the provisions so widely distributed between the three main branches of federal government, and the reasons for those limitations. Many of them could not tell you what those three branches are. Most could not name one Amendment or Article thereof...yet these are the people voting on the issues and leaders to enforce that very Constitution.

If we continue to drink this bathwater of fear and relinquish our controls due to disinterest in the facts or lack of understanding...we citizens will soon find ourselves part of a nation-state that is no longer "of the people, by the people and for the people"... and we will deserve our lot.