The Drug War and the DEA

Happy New Year everyone. I might have a New Year blog to write over the weekend...but meanwhile I continue to see the topic of "prohibition" and the most costly and failing world-wide war against "drugs" as one of the key issues of our times.

Better than the article linked above is the first "comment" to that article by "malcolmkyle". Since I could not write a better opinion myself...I just chose to copy here for your reference:

Prohibition is a sickening horror and the ocean of hypocrisy, incompetence, corruption and human wreckage it has left in its wake is almost endless.

Prohibition has decimated generations and criminalized millions for a behavior which is entwined in human existence, and for what other purpose than to uphold the defunct and corrupt thinking of a minority of misguided, self-righteous Neo-Puritans and degenerate demagogues who wish nothing but unadulterated destruction on the rest of us.

Based on the unalterable proviso that drug use, among all echelons of society, is essentially an unstoppable and ongoing human behavior which has been with us since the dawn of time, any serious reading on the subject of past attempts at any form of drug prohibition would point most normal thinking people in the direction of sensible regulation.

By its very nature, prohibition cannot fail but create a vast increase in criminal activity, and rather than preventing society from descending into anarchy, it actually fosters an anarchic business model - the international Drug Trade. Any decisions concerning quality, quantity, distribution and availability are then left in the hands of unregulated, anonymous and ruthless drug dealers, who are interested only in the huge profits involved. Thus the allure of this reliable and lucrative industry, with it's enormous income potential that consistently outweighs the risks associated with the illegal operations that such a trade entails, will remain with us until we are collectively forced to admit the obvious.

There is therefore an irrefutable connection between drug prohibition and the crime, corruption, disease and death it causes. Anybody 'halfway bright', and who's not psychologically challenged, should be capable of understanding that it is not simply the demand for drugs that creates the mayhem, it is our refusal to allow legal businesses to meet that demand. If you are not capable of understanding this connection then maybe you're using something far stronger than the rest of us. So put away your pipe, lock yourself away in a small room with some tinned soup and water, and try to crawl back into reality A.S.A.P.

Because Drug cartels will always have an endless supply of ready cash for wages, bribery and equipment, no amount of tax money, police powers, weaponry, wishful thinking or pseudo-science will make our streets safe again. Only an end to prohibition can do that! How much longer are you willing to foolishly risk your own survival by continuing to ignore the obvious, historically confirmed solution?

If you support the Kool-Aid mass suicide cult of prohibition, and erroneously believe that you can win a war without logic and practical solutions, then prepare yourself for even more death, tortured corpses, corruption, terrorism, sickness, imprisonment, economic tribulation, unemployment and the complete loss of the rule of law.

"A prohibition law strikes a blow at the very principles upon which our government was founded."
Abraham Lincoln

The only thing prohibition successfully does is prohibit regulation & taxation while turning even our schools and prisons into black markets for drugs. Regulation would mean the opposite!

Prohibition is nothing less than a grotesque dystopian nightmare; if you support it you must be either ignorant, stupid, brainwashed, insane or corrupt.

While I share these sentiments, I understand why so many Americans support our government's spin on this issue. Drugs and other forms of addiction...including food and prescription drugs...are killing tens of thousands every year in the USA alone...and we want "big brother" to take responsibility for it. We are the biggest consumers of drugs both legal and non by far on a per capita basis. As long as we have this prohibition and focus only on the symptoms of our addictions and the black market suppliers to them...we will continue wasting billions of dollars annually through government and military operations that could be better invested elsewhere.  This war has been more futile and expensive than Iraq and Afghanistan combined.

I know many will think I am a total conspiracy theorist...but I still believe...and with recent Wikileaks publishers proving it more...that governments have used this "war on drugs" to further push their military agenda and dominance over "the people" on a grand scale. The "DEA" has basically supplanted the "CIA" as the largest infiltrators of foreign governments and soil. Big government has used the fears of terrorists and our "addictions" to convince us that they alone can provide for our "safety and tranquility" through bigger/newer bureaucracies of government and military might. Constitutional limitations of federal governments and courts have been thrown out the window of expediency. I fear this momentum has gone so far down the fast lane that it might never be recoverable for the side of constitutional law.

I am fully convinced that if these "illicit" drugs were made and regulated in the USA like all other drugs...taxed and controlled...there would be less of this drug "sub culture" controlling so many of our fellow citizens. There would be more money for education, addiction clinics...and all these foreign "narcos" would be out of business or at least limited to competing as a foreign importer. At least they would have to compete on a market basis against legitimately produced domestic drugs of choice.

While in general I agree that most of these drugs are very harmful to humanity (along with cigarettes, alcohol and "McDonalds" type food fare)...it seems quite obvious to me that as the commentator above has stated so eloquently..."Based on the unalterable proviso that drug use, among all echelons of society, is essentially an unstoppable and ongoing human behavior which has been with us since the dawn of time"...it is time we regulated versus prohibited "the people" from having what they want. If they do harm while "high"...they should be prosecuted heavily. To incarcerate them simply for escaping their own realities or pain is NOT a humane thing to do. That my friends is not for us to judge. "There but by the grace of God go I"...

Prohibition basically just makes the criminals and governments rich...at the expense of the taxpayer and drug user. You don't see the connection?  No demand...no supply. It's so simple as to be invisible to current day leaders of our institutions.
Posted by The Global Observer at 2:13 PM No comments: 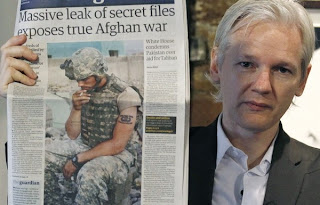 My how quickly "Cyberwars" escalate. This outing of hacked information from Wikileaks of the US government has certainly created a firestorm of conflicts being played out in all forms of media, governmental spy rings and has created one of the biggest "chess games" ever battled in cyberspace for distribution of information.

I have had a number of interesting discussions and exchanges of email on this subject in recent days. It is interesting to note that most "Americans" are siding up with their government on this issue in criminalization of  these "leaks"...and many foreigners are siding up with Wikileaks. This to me is another "sign" of how isolated our USA thinking is on a mass scale per global perspectives. Even "Pravda", Russia's leading news outfit, has now accused the USA of total hypocrisy when it comes to "freedom of information" and the press. Ouch...Russia preaching to US!

Many of us may have an "I don't care", blind patriotic position on this issue. I know I am personally struggling on this issue between freedoms and "patriotism". I am embarrassed for my country as I stated in my last blog on this subject...but I am also angry at many of the things "we" have done in recent and also long term history of our nation.

As my grandfather always used to say, "Be sure your sin will always find you out". The sad thing here is that the most powerful government in the world is being exposed for many heinous attitudes and actions taken "behind the scenes". Many of our "leaders" have written and expressed positions that they never thought would be exposed publicly. What is sad about this situation is that nobody is saying the information being distributed is FALSE. A person and a company is being persecuted globally...for distributing "truth". What a difference a day makes... Will people die or be exposed to foreign "powers"? I have seen no documented incidents so far...and I hope not. Yet, when people take on such roles with "nations", they probably understand the risks and are often in those roles for some pretty selfish reasons (money, adventure, power).

Regarding the "morality" of Wikileaks actions, what is so different about this situation than say...media's exposure of "Watergate" or the Iran Contra affair? We gave awards and accolades for those who so intently exposed governmental criminality and coverups. What about "Whitewater" and other shenanigans? People were killed (or took their own lives?) over many of those revelations.

Lets remember that at the founding of the USA, many esteemed "revolutionaries" were killed for stealing and disseminating "governmental" orders or documents to the constituents of that former British colony. Damn that Paul Revere for riding around and warning everyone that "The British are coming"! That was a state secret. If we are paying off Karzai in Afghanistan and other leaders worldwide in order to "do our bidding"...I want to know about it. That's MY money going to despicable opportunists and power mongers.


Change is normally driven from the top...based on demands from the bottom or outside. While Wikileaks obviously is based on info that is not owned by them...our governments steal, distort and extort others based on espionage and spying all the time. It seems quite hypocritical they should be criminalizing their own behavior...but of course it is common for governments to have a different set of standards than they impose on the governed. Nothing will change until the masses decide to do something about this international carnage and quit believing the governmental hype at all levels. These governments should be APOLOGIZING...not rationalizing. Its time for confessions and forgiveness...and then "sinning no more".
I truly believe positive change will come from this global incident. Yes, it is embarrassing and further weakens the "moralistic" posturing of my country. Yet, the sooner we realize our political immoralities and misguided actions...the sooner we can turn things around with honesty and transparency. It is about time we had more of that.
Hating Mr Assange is like hating the person who tells you they saw your spouse cheating on you. You may hate the idea that THEY know;  you might question their reasons for telling you; but you might be further ahead to no longer place blind trust in that partner.
Posted by The Global Observer at 10:15 AM 1 comment: