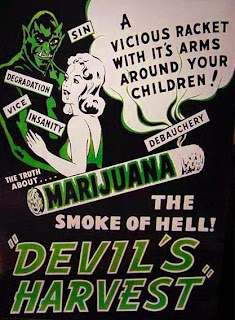 After reading the obit of one of America's leading experts on the history of drugs in America, David Musto, it reminded me of many observations and articles read over the years on this subject. I have alluded in other blog posts to some of my viewpoints on the "drug war" my country is losing and the monies wasted in the wrong directions...but I have not clarified my thoughts in writing on drugs overall.

One of my fundamental disagreements with the world-wide "drug wars" is that YOU CAN'T LEGISLATE MORALITY FOR ANY SIGNIFICANT PERIOD OF TIME! During my relatively short lifetime, we have seen TRILLIONS of dollars spent trying to control the supply of what are deemed "illegal" or "illicit" drugs...with much of that money coming from heavy "sin" taxes on "legal" drugs/substances such as tobacco and alcohol...which substances kill hundreds of thousands of people every YEAR! Most of us have seen people close to us affected or dying from using these substances, yet...they remain legal while substances such as Marijuana...which have scientifically been proven to have medicinal properties for some diseases...remain taboo and illegal. My opinion is, if you are going to legislate limits on one harmful substance, you need to put limits on all. But of course, prohibition never worked and will never work. And lets face it...SOME companies and rich families make a LOT of money on those products/substances in worldwide distribution.

In addition to the societal costs of fighting global "underground" suppliers to our addictions...we continue to criminalize the sick and demented addicts among us...without getting to the root of the cause. Our institutions just drive many of these forces and appetites underground which has now established huge resources and revenues that will never be documented or enter mainstream commerce. We have created two economies...and two macro classes in our global population; traditional/formal markets and underground/informal markets. Global economies cannot be truly measured without taking into account those informal markets.

PRIMAL MESSAGE: We will never eradicate the supply if we don't affect the demand.

In my broad travels and experiences in life, I have observed many aspects of the "drug dilemma" fairly close and personal through some people close to me. Substances from alcohol to Marijuana to "prescription narcotics" to harder drugs have affected the personal lives of many potentially great people who have been in my path. That makes it a very personal and emotional issue by nature. Anyone I have known who overcame addictions did so by PERSONAL CHOICE, not by edict or legal decree. Even legislated drug treatment programs mandated by a court on someone are a waste of time if THAT PERSON is not ready to change their lives and actions. Some of the most obvious hypocrisies I have seen on this issue are "blasted" cocktailers spewing forth about putting "druggies" in jail. It would be laughable if it weren't so sad.

I grew up in the late 60s and early 70s when "illicit drugs" and "free love" became more mainstream aspects of American culture. The boomer generation and large economic growth of those times fueled a consumerism that was insatiable. With new wealth and independence came new levels of greed, debauchery...and emptiness...as people began discovering how money and freedom alone does not bring happiness. As people began to express their "freedom" and "success" by throwing out many cultural taboos and traditions...individualism became more rampant and the rule of law in governments and religions were questioned and/or disregarded by the growing multitudes. Individuals were allowed to explore their natures and had the economic freedom to do so. With this new wealth and boredom came the tendency to "medicate" both legally and illegally any ache, pain or depression we were experiencing. Have a headache? Pop an aspirin. Pulled muscle or back spasms? Pop a big dose of Ibuprofen or some sort of steroid. Feeling depressed? Here...take the latest version of psychotic drug recommended by your psychiatrist. The problem with all this "cause and effect" was that these substances taken over a long period of time can kill us by affecting other organs as side affects...and often taking medications only cover up "symptoms" of a real problem or health defect. What is the morality of that? Even after adjusting for inflation, we now spend as much on health care every 10 days as we did in the entire year of 1950. That's the cost of drugs for ya...

As I now look back to those times (60s-70s), I begin to see the roots of current political and religious realities. Forgive me if I am too "general" in some of my comments for the sake of brevity and blogspace...but drugs has for me become the main "battle ground" for the cultural wars in our society. There are also a number of ironies that to me are so obvious...

The more society's institutions try and place dogmatic controls on the behaviors of its members, the more various factions go in extreme opposite directions. Most humans/individuals have the constant battle between what they WANT to do as individuals and what is ACCEPTED by their peers and fellow members of society. Some of us obviously stray more independently than others.

Dr. Musto's work also pointed out "...the close correlation, historically, between public outrage over certain drugs and their use by feared or hated minorities." This governmental "war on drugs" has become a "class war" and against the people themselves...not the drugs or addiction. This is most evident when you see poor black or minority young men incarcerated for years for possession or sales of drugs...while rich and "pretty" white actresses who are repeat offenders serve no more than a few hours of a few MONTHS conviction. I am a white person who is enraged by this lack of uniform justice in my home country.

This is a huge subject I know...but I think the macros can be summed up quite easily. The "war on drugs" by all statistics has been a failure...BECAUSE...with all the trillions spent we still have more and more addicts, pushers and kids BUYING the stuff...both legal and non-legal substances. And while they succeeded in reducing the drug supply chain in Colombia...it has only been replaced and multiplied in Mexico which is almost in a state of anarchism as the money and supply has been pushed CLOSER to the users by this drug war. Ridiculous!

I know many people who come to Latin America and elsewhere to load up on "legal" prescription drugs without prescriptions and are as "addicted" to them as any heroin addict. The false morality of this is huge. Just because drugs...or alcohol...or tobacco are legal doesn't mean you have license to destroy your health with them. To this end...ALL drugs should be legal and controlled by society for societies sake. This would take most of the drugs off THE STREET and put them in pharmacies or clinics where they belong. People should not be convicted for using them, but for losing control on them. If someone wants to OD, it is their privilege and personal responsibility regarding that possibility. If they affect or damage someone else while out of control...that is when institutions of society should step in to protect victims and the rest of society.

It is my fundamental belief that if government and religion put the same amount of money and effort into helping educate and treat the USERS of drugs...including warnings about the legal prescriptions of synthetic drugs that are killing many people... the war on drugs could be turned around. Yet, I fear there are many dark forces behind the scenes that are quite happy having the war as it is. Ongoing, never ending churning of funds through their grimy big hands/accounts that perpetuate the cycle of devastation and destruction...mostly to the poor and minorities who some people want to keep minimalized. And lets face it...drugs also keep the rich and beautiful aloof to what is really going on as well.

Final quote from THIS LINK...

"One of the defining characteristics of the drug war is politician’s ignoring expert findings and providing demagogic enforcement measures to placate idiot & ignorant voters. And never, ever, EVER considering de-criminalizing and harm reduction allied to social reform."
Posted by The Global Observer at 11:10 AM 1 comment: