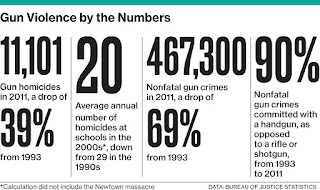 I am not a member of the NRA...yet I don't understand governments that want to ban personal ownership of guns.  I don't think my government should have something that they don't allow me to have...including Cadillac health plans and offshore bank accounts.

I understand the difference between "rights" and "privileges".  I understand our society putting up limits to "rights" if an individual cannot responsibly handle the freedom of their "rights".  Tommy may be able to responsibly handle guns, alcohol, and driving at the age of 14.  Jerry may not be able to handle any of them at the age of 40.  The law for everyone should not be based on the 40 year old.

In much the same light, if John can vote and die for our country in the military or police force at age 18...he should be free to do anything I can do including drink alcohol, gamble, or serve in various government positions local or national.  In addition, if he can carry a weapon to serve and defend our country...he should damn well have the right to carry a weapon to defend himself or his family.

Guns are not violent.  People are.  If we are going to outlaw anything, let's outlaw violent people.  That includes people who suffer from "temporary insanity".  If I harm another person, I should not escape punishment or incarceration just because I was "high" or suffering some mental or physical illness.  Pedophiles are mentally sick people...but they should not get away with their crimes just because of their "condition". Our liberal judicial system is out of whack when it comes to criminal cases.  This is helping feed the violence and aggression in our streets.

Finally...it will never make sense to a "gun person" when, if danger from violence is growing within his community, some government asks him to give up his guns.  I think that goes against the grain of common reasoning in human nature for self preservation.  After all, governments are the principle buyers of most firearms. The purpose of government is to protect freedoms...not take them away.
Posted by The Global Observer at 9:12 AM

Thank you to tell us so much useful information. I’m glad to read it. For more information visit daily tech studios

Aiman Online Quran Learning Academy is an impressive online academy for teaching the Quran.
This leading online Quran academy from
Pakistan provides you an excellent chance to have one
online Quran classes for kids with tajweed and learn
the basic teachings of Islam.