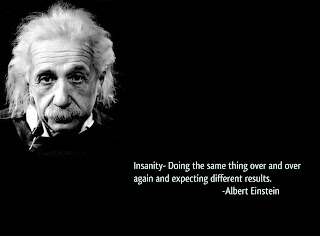 I love Albert Einsteins definition of insanity.  It helps explain so many things...

We see this insanity playing out in our contemporary lives in many ways.  Here are just a few examples from recent life experiences...

It is a human tendency, for whatever reasons, to be attracted to or pursue relationships with types of people who end up letting us down or not fitting OUR needs.  People marry poorly, time and time again, to the same type of person.  Often these relationships are defined as "co-dependent"  relationships based on NEED.  When one or the other person doesn't NEED anymore...there is usually a breakup, heartbreak and disappointment. Then...we go find the next dependent person we can "take care of" or who will take care of us.  INSANITY.

Quote to self: "Love is the expression of one’s values, the greatest reward you can earn for the moral qualities you have achieved in your character and person, the emotional price paid by one man for the joy he receives from the virtues of another...To say “I love you” one must know first how to say the “I.”"

Everyone loves the concept of "unconditional love", and religion and other societal institutions instruct us to be generous with our selves and our resources. Altruism seems to be the highest calling...and governments and religions continuously together call for "self sacrifice", whether it be "serving your country with military training" or giving more and more of your productivity to cover those who are unwilling to produce themselves.  When altruism without responsibility becomes the mode of human society, that society will crumble to the ground based on its lowest common denominator of weakness and dependence.  When it takes guns to force natural distribution of goods and services...our world is doomed.

Quote to self: "Do not ever say that the desire to “do good” by force is a good motive. Neither power-lust nor stupidity are good motives...The purpose of morality is to teach you, not to suffer and die, but to enjoy yourself and live....I swear by my life and my love of it, that I will never live for the sake of another man, nor ask another man to live for mine..."

There seems to be no consensus or reason in most governments of how to "balance a budget".  Numbers no longer have to add up and money has become meaningless.  Credit rules the world, especially governmental credit. This cycle of political insanity has come down to simply promising the masses most anything they want in return for their vote...without the funds or resources to fulfill those promises apart from taking from someone else. First world systems are now based on trillions and trillions of untamed spending to meet political and social commitments that never should have been made in the first place. And yet, we continue to elect the same types of inept leaders to positions of power and persuasion in our governments who want to redistribute by force the gains of one person or company to cover the sins and failures of another. Somehow, having wealth has become a "sin" and subject to attachment. Insanity...

Quote to self: "Watch money. Money is the barometer of a society’s virtue. When you see that trading is done, not by consent, but by compulsion — when you see that in order to produce, you need to obtain permission from men who produce nothing — when you see that money is flowing to those who deal, not in goods, but in favors — when you see that men get richer by graft and by pull than by work, and your laws don’t protect you against them, but protect them against you — when you see corruption being rewarded and honesty becoming a self-sacrifice — you may know that your society is doomed. Money is so noble a medium that is does not compete with guns and it does not make terms with brutality. It will not permit a country to survive as half-property, half-loot."

Benevolence is not a bad word or concept.

It is my profound observation in life that true benevolence is innate in most of the animal kingdom. There is an inbred nature even in humans to join together in community to survive and to be happy in relationship to one another. "Birds of a feather flock together". There is no greater sadness than to see a person totally alone, shunned from societal acceptance and therefore subject to peril and inability to survive physically, emotionally or spiritually. I don't pretend anymore to know where human spirit comes from or if it goes somewhere at death. Yet, I believe in spirit because even if invisible, I see its work in the uniqueness of every individual I have known or will know. I don't have to tie that observation into some mystical belief or claim to know its origins or destiny. Yet...such as in benevolent acts of kindness, I can see its positive effects in helping those who are less fortunate, less educated or who are truly handicapped, aged or struggling. No natural person wants to see suffering and dying animals...or humans. Yet today, we see on the news everyday the willful neglect and suffering of millions in our small world. While it is a big subject, my biggest generalization of this problem is that the individuals of this world have relinquished benevolence to governments and religions...who actually work hand in hand to PERPETUATE these immoral, inhumane conditions even if through ignorance or simple lack of willpower. When we see pain or suffering, we wait for these institutions to do something about it...and of course many of us think our taxes and religious donations should be plenty to "do our part". This has obviously not been working for centuries now...and it is INSANE to think it ever will.

Quote to self: "I worship individuals for their highest possibilities as individuals and I loathe humanity for its failure to live up to these possibilities...There are two sides to every issue: one side is right and the other is wrong, but the middle is always evil. The man who is wrong still retains some respect for truth, if only by accepting the responsibility of choice. But the man in the middle is the knave who blanks out the truth in order to pretend that no choice or values exist, who is willing to sit out the course of any battle, willing to cash in on the blood of the innocent or to crawl on his belly to the guilty, who dispenses justice by condemning both the robber and the robbed to jail, who solves conflicts by ordering the thinker and the fool to meet each other halfway. In any compromise between food and poison, it is only death that can win. In any compromise between good and evil, it is only evil that can profit."

Finally...I have had more than one friend in the past few years take their own lives. These were not people who were under educated...who never experienced the joys of family, success and happiness. Yet, I think in most cases these individuals became entangled in the insanity of "false expectations". I think perhaps they felt it very important to "measure up" in the eyes of society or their families. Their meaning and reason were given over at some point to external powers or influences.  When they came to those moments of despair and panic that they were not "measuring up" to the world's view of them, they lost the meaning of their own selves and their spirits were crushed. They lost their reason. Could those of us around them have helped more? Maybe. Could we have been closer to see these things coming and perhaps intervene? Perhaps. But at the end of the day, I believe it is up to each of us individually to hold on to our own reason and sanity. We should not allow the institutions of our world or the simpletons of society to "give us" our respect or due. The goal as I see it is to grow within our own reasoning and convictions...live according to OUR dreams and ambitions...and to hell with the false and unrealistic expectations of the manipulating world around us. It is INSANE to follow their continued cycles of doom, despair and falsehood. As long as our minds can reason, we can find solutions...and even if we don't find them, it is better to die trying than to give in to failure.

(Assorted quotes to self from various works by Ayn Rand)
Posted by The Global Observer at 11:26 AM

My lifestyle would be different because they would all identify the energy of limitless probability in their own lifestyles which would impact our connections favorably as well as it would achieve out to all their own individual connections like business, work, romantic endeavors, close relatives, etc. steve holman old school reviews

What other contractor can say they were involved in the design process of an all-electric service vehicle? Not many! Robichaud is a great example of a contractor on the cutting-edge of technology. He serves as an example to others to take a risk and test new technologies. old school new body scam

The Venus Aspect Assessment is the test of the Venus Aspect system, which is a well-known bodyweight reduction system specially engineered for females. venus factor system reviews

Great buy for the price! I received the item in a day or so and I was able to complete a photo project I had been working on! It also shuts the feeding ports when they put enough weight on the ring. It turned out much more practical than I thought! Aside from just letting him chew on the links, I also used a chain of them to hook up toys to the stroller bars, so he could freely play with them but they won't drop to the floor. Just remember to buy spare filters, light bulbs and the powercable. Quick Move Now