Live by the sword... 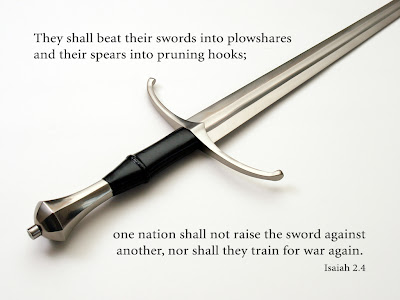 ...die by the sword. This core message of Christianity seems to be missing in our "Christian" nation`s body politic. How Christianity ever went from turning the other cheek to "Onward Christian Soldiers" and the "Holy Crusades"...I will never know. Yet our country and world today continues to be plagued by "wars and rumors of wars" perpetuated primarily by differing religious and ethnic views.

Militarism continues to be the only answer considered by many of our leaders in conflicts between nations and various ethnicities. Somehow the USA has put itself in the middle of MOST of these conflicts as our government continues to destroy our country`s economy, soul and moral fiber. This past weekends murdering of Afghan citizens by a USA Army Sargent plainly underlines the insanity of why we are there and what we are doing. Four years after our President promised, if elected, he would get us out of Afghanistan within 6 months...well, we now see who DOESN`T have the power or devotion to keep his word. We continue to waste lives and countless trillions of dollars we don't have...and for what? To save face? To make some kind of point that is lost in the sands of time? Sadly, even the Taliban are now claiming the moral high-ground over our USA forces over there. Oh my God!

Fundamentally, we Americans must examine ourselves in light of the past 50 years of military conflicts. Contrary to what some "leaders" claim, we have had no clear victory in any conflict since WW2. Korea, Viet Nam, Nicaragua, Panama, Somalia, Iraq and Afghanistan...among others. Can we truly point out any long term positive results for the USA in any of these conflicts? Do these people love or respect us any better than before? I don`t think so. OK...I almost forgot Reagan's 7 week invasion of Grenada in 1983...a "smashing success" for liberty. I guess we handled those 2200 Grenadian and Cuban soldiers with ease. But now we have some leaders in the USA who want to take on Syria and Iran in addition? Can anyone define "insanity" any better?

I am not necessarily a "Dove" or a "pacifist". I believe in defending one`s rights and liberty to the core of my being...and I WOULD take up arms in defending my family, my rights or my possessions. Yet, our Federal government, with all its ties to the military complex, arms dealers and espionage activity throughout the world continues to ask my fellow countrymen to fight the battles THEY are starting. Especially since 9/11, we have taken on "the aggressor" role in all the battles we are currently fighting. And we wonder why most foreigners do NOT like us or our politics? Yes, 9/11 was a travesty...yet our government has used that event maliciously to grow its agenda and usurp its authority around the world. The Patriot Act and other legislation since has continued to trample on our freedoms and individual sovereignties. We Americans have willingly given up our liberties in return for "security"...which really doesn't make us secure at all, does it?

My main problem is with governments or institutions worldwide who instigate wars that they expect OTHERS to fight for them. I don`t believe the USA constitution allows for anyone to order our country into battle without a "Declaration of War" by the US Congress. Ron Paul is the only person running for President in our country who remembers and speaks out on this key regulation of our Constitution. He understands that we ARE "living and dying by the sword". The extremists and terrorists LOVE this reaction of ours. They see better than we citizens do how this is undermining our economy and our democracy.

Anger and angry reactions are ruling the day in American politics and society over all. We have lost our heads over desire for revenge and retribution for 9/11...and we (our government) have turned on many former friends in our quest for blood and revenge. There is no doubt that getting my gun and going after my enemy is a typical first reaction when threatened or affected by an enemy. Yet, it might be higher minded to first think and ask the question "why are these people or certain countries my enemy?". Have I/we done anything to justify their anger and aggression? Is there anything I can do to make peace first? If they are hungry, can I feed them? If they lack education, can I educate them? In most cases I don`t think we believe in those long term remedies. It is just easier to wipe them out with our military and/or economic isolation. This just continues to breed hate and animosity. Did any "Christian" leader ever read the "Beatitudes" in the sayings of Jesus? You know...blessed are the poor in spirit...blessed are the peacemakers...

I think there is plenty of evidence in modern day history to understand that we Americans are NOT angels...not even very good "Christians". We are quick to anger. We are obnoxious as hell. Our power in the world militarily and economically has completely gone to our heads as a nation...and we are now paying the price, having let our leaders squander so much of our resources and good will throughout the globe. We have been lulled into battles that aren`t ours to fight, and we continue to rebuild that which we tear down with our own resources and because of "guilty consciences". While we were forced to fight tyranny in the great World Wars of this century, our battles since then have been mostly underhanded and clandestine. Our governments have hidden their actions and their motivations from "the people" for decades now. This must stop if we are to survive as a nation.

I know that many of my American family and friends do not agree with me on this theme. I am sorry about that...but it is time we faced the truth of our short history as a nation. If we don`t get real about this subject soon, it will be too late to restore the ideals of liberty and economic growth that fueled our nation from the beginning. We need to go back to the beginning to understand where we went wrong. What we did to the American Indian. The millions of slaves and foreigners who built our railroads and developed our agriculture without much of a choice... or paycheck. The racism and cultural wars that continue to plague the unity of our country. The rest of the world sees this...why can`t we? The USA is on verge of collapse...unless we take some drastic actions SOON. We are NOT the "teflon nation".

So, what can we do? Here are a few basic suggestions I have for my fellow Americans...


*A good defense is cheaper and easier to provide than a global offense. We need to pull out our resources from the over 1000 foreign military bases we own. According to the 2010 Department of Defense Base Structure Report, the U.S. military owns 172,015 buildings inside the United States with a total size of 1.5 billion square feet. It owns another 202,178 in other countries, covering 1.7 billion square feet. These sites are in nations as far-flung as Djibouti, Bahrain, Colombia, Egypt, Singapore, Greenland, Aruba and Luxembourg. This while we continue to run the national deficit trillions more in the red. Fateful mistake.

*Instead of Military Bases, the USA should have "Economic Bases" of trade and job training...throughout the world...to enable our global companies and economy to gain in the global market place. Protectionism will no longer work because of Globalization... which is here to stay. We cannot go back to the "dark ages" of government sponsored, institutionalized controls of currencies, economies and industries. Everyone, rich and poor, need to be enabled to study, work and compete in the global economy...not just our own. Hopefully eventually we can downsize the military instead of Research and Development centers. Hopefully we will soon have more qualified young people ready for productive, safe jobs instead of only knowing how to carry guns and say "yes sir".

*The fastest way to win the "Drug War" and save Billions is...get off the drugs, alcohol, food and all the other addictions that are dragging our populace into the gutter, both literally and figuratively. Destroy the demand and the supplies will go away. Then we can devote these resources, military and otherwise, to more productive use. This is done by education and rebuilding moral fiber...not threats of imprisonment or becoming an unwanted member of society.

*With a better "Defense", America can better control its borders and policing of immigration. We need to change our laws that automatically give rights and aid to foreigners in our country. No other nations have such a policy...why do we? I get no access to such support in Panama without paying for it. The European Union holds no hope of benefits for non citizens. We are better off contributing aid where these foreigners live...AFTER taking care of our own first.

*Most importantly, the average American has to stop counting on obscene promises of government bailouts and entitlements that are out of control. Way too many Americans are counting on too few other Americans to provide the funds and taxes that float social security, unemployment and so many "public" job entitlements that even our rich, out of touch Congressmen enjoy. When Democracy turns into the majority voting for whoever will GIVE them the most from the public dole, well, that Democracy is doomed.

Some would argue that wars are good for the economy. It certainly was in WW2 when that huge conflict spurred so much productivity and a victor`s impetus towards rebuilding the world once the oppressor was conquered. Some call that generation "the Greatest Generation" for what they accomplished out of the rubble and destruction of WW2. Yet, we now see very little of those values for overcoming hardship or unity based on pride of accomplishment. The world and unfortunately too many Americans are about "Gimme gimme gimme"...and the only purpose for the sword now should be protecting what little is left in our "storehouse".

Finally, one last big caution. Much of today`s "saber rattling" is over Nuclear armaments. This is another level of armament that started in the USA and quickly escalated throughout the Cold War. While cooler minds have prevailed in the superpowers since those days, unfortunately the world is still full of enough nuclear arsenals to destroy all of mankind. If we don`t start reversing our tendency towards "reliance on the sword", we will once again see a demonstration of what we have wrought...and it will make Nagasaki and Hiroshima look like firecrackers going off.

It is way past due to turn "swords into plowshares". We need productivity, not destruction. We need to send food and clothing...not bullets, bombs and grenades. Someone needs to start the dialogue of peace and reason...without holding a gun at someones head in the background. The powerful Christian message that started to change the world 2000 years ago was of peace, forgiveness, community and SHARING. Not just with your fellow citizens or Christians, but with your enemies as well. Most Christians have fallen far from the founder`s message. America needs to lead in this versus being the largest perpetrator of armed conflict. We need to defend our country, but we need to stop our aggression, oppression and occupation. Bring our soldiers home to their families where they belong.

Think about all this when you next have the opportunity to exercise your vote or talk to your representative government...
Posted by The Global Observer at 8:55 AM